Throughout history, and from all standpoints: philosophy, medical science, religion; people have believed that each man and woman has a multiple nature.

In the early 20th century, Sigmund Freud first established that the human psyche is multi-faceted, and that each of us has warring factions in our subconscious. Since then, new theories continue to be put forward, all concentrating on the essential conviction that each one of us has parts of our personality which surface and affect our behaviour according to different circumstances.

In 1951 Dr Wilder Penfield began a series of scientific experiments. Penfield proved, using conscious human subjects, by touching a part of the brain (the temporal cortex) with a weak electrical probe, that the brain could be caused to ‘play back’ certain past experiences, and the feelings associated with them. The patients ‘replayed’ these events and their feelings despite not normally being able to recall them using their conventional memories.

Penfield’s experiments went on over several years, and resulted in wide acceptance of the following conclusions:

In the 1950’s Eric Berne began to develop his theories of Transactional Analysis. He said that verbal communication, particularly face to face, is at the centre of human social relationships and psychoanalysis.His starting-point was that when two people encounter each other, one of them will speak to the other. This he called the Transaction Stimulus. The reaction from the other person he called the Transaction Response.

Transactional Analysis became the method of examining the transaction wherein: ‘I do something to you, and you do something back’. 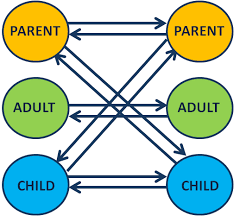 Who Can Benefit from Transactional Analysis?

Transactional analysis is frequently applied in the areas of medicine, communications, education, and business management as well as therapy.

The mainstream appeal of this technique has attracted leaders, professionals and other workers who strive to achieve maximum personal development or enhance their stakeholders’ management and relationship building.

Transactional analysis is considered to be one effective method of enhancing relationships with oneself and with others.

Transactional analysis is used widely in the educational arena but now also in many organisations which foster a positive, agile and constructive working culture.

This method can serve as a vessel through which educational principles and philosophy can be incorporated into the daily lives of ALL workers.

The Open Group 2022 Highlights, Including a Glance into 2023

By Steve Nunn, President & CEO, The Open Group. Happy New Year! I hope that, wherever you are reading this, 2023 has started well for you and yours. I believe that 2023 will be another busy and significant year for The Open Group, as was 2022. So much happened last year that I thought that… [...]

What Topics Will You Be Covering At Forrester? I am part of the Forrester Decisions for Technology Architecture & Delivery service. I will be authoring research for the “Lead A High-Performing Enterprise Architecture Practice” priority. Briefly said, I will help clients be more proficient in the enterprise architecture (EA) discipline from a digital, sustainable, and… [...]

Making Observability Data Work for You
Solution architect: how to make the jump from developer

Solution architect is a natural next step for developers to take in their career, moving from building software solutions to designing and conceptualizing them. It’s a role with higher compensation, and solution architects are in demand right now, with opportunities expected to grow over the next decade. Let’s find out more about the benefits… [...]

By Whynde Kuehn, Founder and Managing Director, S2E Transformation The book Strategy to Reality casts a vision for how organizations can approach strategy execution from end-to-end, leveraging business architecture (and of course enterprise architecture as [...]

If someone tries to get you to invest in some shiny new technology — like blockchain 5-8 years ago — beware. How do you judge these proposals? A realistic use case is key. [...]

What is a Business Architect?

Software is increasingly playing a critical role in the efficiency and effectiveness of all work processes in various industries. Over the last decades, we’ve seen that software has a disruptive power with the ability to create or make some jobs obsolete. Not only technology industries but end markets too, are impacted by software. It’s a... [...]

by Maryam H. Aldhewalia and Sagar Alzaidysolutions by stc One... [...]

Securing Your Move to the Hybrid Cloud

Infosec expert Rani Osnat lays out security challenges and offers hope for organizations migrating their IT stack to the private and public cloud environments. [...]

Over 130 companies tangled in sprawling phishing campaign that spoofed a multi-factor authentication system. [...]

It’s not what you think…